I reject being labeled an “activist-scholar” because it has largely been used pejoratively and is condescending toward activism. Rather, I believe my scholarship to be complementary to the tireless service of grassroots community leaders and activists; by working closely with them at every step of the project – from research design to translation – my work is far more rigorous and impactful than it might have been with a top-down approach.

With this in mind, I’ve been attempting to shed light on the lives and experiences of Detroiters by examining the scope and ramifications of water insecurity in the city. The Detroit Water Stories project, in collaboration with film maker and Associate Professor Kelly Donnellan, and funded through Wayne State University’s Arts & Research Enhancement Program and the Waterhouse Family Institute at Villanova University, is deeply community-centered. We gather oral history narratives from community members and leaders to understand the social, institutional and ecological risks pertaining to the city’s water crises—ranging from the ongoing shutoffs to low-income households that have affected more than 100,000 families since they began in 2014, to the recurrent flooding of homes and neighborhoods that are intensifying as Great Lakes levels rise due to climate change, and the region’s water infrastructure remains grossly underfunded. We adopt a systemic view, noting how these issues are closely interconnected, along with the regions’ long history of racial segregation and urban-suburban tensions, and the current gentrification of some neighborhoods that are hardest hit – such as Brightmoor and SW Detroit – and the public health implications that follow. At the same time, we center voices that are often marginalized—such as the single mother of three afraid to tell anyone her water is out because Child Protection Services may remove her kids from her care under Michigan Law, or because her landlord who has not been paying the water bill will evict her. We have partnered with local organizers, museums and institutions to facilitate workshops and teach-ins, organize donation drives, and create multi-media information material. Our goal is to produce scholarship across multiple media that serve as audiovisual essays and mixed media online journal articles that are open-access. Believing that the narratives we gather “belong” first and foremost to the community, we are also sharing them through our project website www.detroitwaterstories.wordpress.com, social media (#DetroitWaterStories on Twitter), and our YouTube channel. This is also the best way we can be directly relevant to the efforts of our grassroots partners, to help address the misinformation around the city’s water crisis. 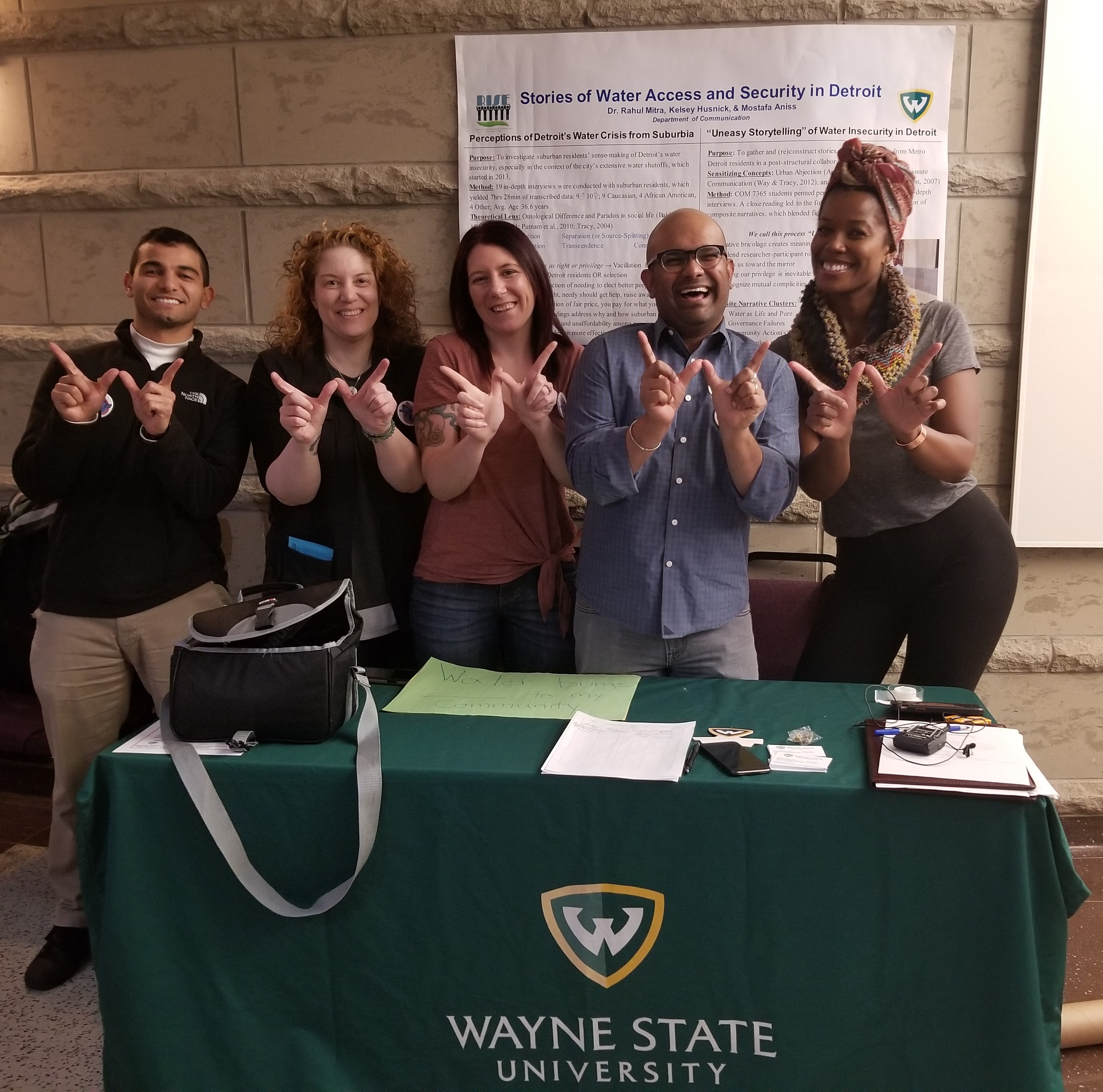 This work is easily the hardest project I have taken on, not merely because of the complex forces at stake in Detroit’s water crisis, but also because it has fundamentally reshaped my values and ideas of what an engaged scholar should be. Because of our transparency, collaboration and willingness to be corrected by our community partners – and believe me, that has happened a lot! – we are doing both better and more influential research. Moreover, by involving my undergraduate and graduate classes in the project, I have found my students to be supremely excited about working on a “real world” social issue. It is deeply fulfilling to help mold a new generation of Wayne State University students who are strongly committed to Detroiters and social justice.

The first picture is of me, Kelly Donnellan, and graduate students Kelsey Mesmer and Jacinda Gant at a STEMinista workshop for Detroit schoolgirls that we facilitated at the Michigan Science Center over the summer of 2019. Our workshop addressed community based participatory research like the Detroit Water Stories project, and we invited our community partners We The People of Detroit and We The Youth of Detroit to also talk about citizen science and do a demonstration of testing water for lead.

The second picture shows PhD student Mostafa Aniss, Kelly Donnellan, PhD student Kesley Mesmer, myself, and MA student Jacinda Gant at our information table for World Water Day 2019 at the Wright Museum. We were among the core organizers of the event, along with several grassroots organizations. We fielded the information table, filmed "vox pops" or short 2-3 question interviews with visitors to the event about the importance of water, facilitated a workshop on community resources for residents struggling with high water bills, and filmed footage of key panels. The footage was shared with our community partners and much of it is also available for public viewing on our YouTube channel and project website www.detroitwaterstories.wordpress.com.